This Wiki is a resource for people who are assembling, programming, or using the instructional tabletop MRI scanner developed by a multi-institutional collaboration led by Larry Wald's group at the Martinos Center for Biomedical Imaging, Massachusetts General Hospital.

The scanner design is a low-cost resource for demonstrating concepts like magnetic resonance, spatial encoding, and the Fourier transform in an educational setting. The system was first used in MIT's undergraduate course 6.S02 - Intro to EECS II from a Medical Technology Perspective. Most of the components are open source designs.

The project was made possible through a collaboration between MGH, the Chinese Academy of Sciences (who built the magnets), Pascal Stang of Stanford University (who provided the MEDUSA console), and Maxim Zaitsev's group at the University of Freiburg (who designed the gradient coil traces). During fabrication we also benefited from access to the equipment and resources of the Center for Bits and Atoms at the MIT Media Lab.

The scanner design is described in a JMR paper [1] and also an abstract from the 2014 ISMRM conference.

Slides describing the tabletop scanner from the ISMRM 2014 Conference. 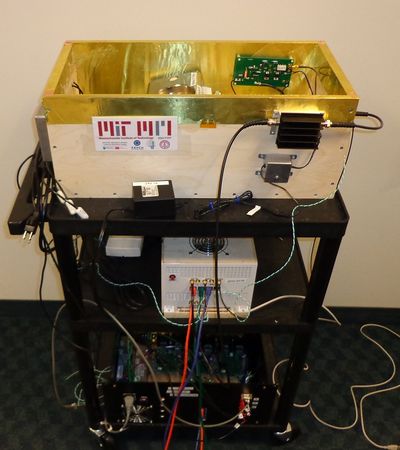 This "crowd-sourced" MRI scanner has benefited from the skills and efforts of many people. We wish to acknowledge some of the key contributors below:

Consult the User's Guide for information on using the wiki software.