From Tabletop MRI
Jump to navigation Jump to search

The gradient amplifier is used to supply the current to the gradient coils. Since it's the fields we care about, and the fields are proportional to current, this amplifier can be viewed as a voltage to current transducer; it takes a voltage waveform from the console and creates a current proportional to that voltage in the gradient coil. It is similar to a common audio power amplifier except that it must also be able to output DC currents. It uses two OPA 549 power op-amps in a bridged configuration. A current sensor compares the output current to the input voltage to ensure that the current itself is proportional to the desired signal. The OPA549s can provide up to 8 amps of current, but in practice the current is limited by the duty cycle of the gradient waveform in the pulse sequence and the size of the heat sink used on the boards.

Two versions of the board have been used with the tabletop scanner. Version 1 uses separate digital-to-analog converter (DAC) boards and provides one output channel per GPA board. Version 2 simplified the wiring and reduced costs by placing three channels with integrated DAC stages onto a single PCB. Version 2 is plug-and-play compatible with the MEDUSA console digital gradient waveform output lines (RJ45 connector).

Email jaystock@nmr.mgh.harvard.edu with any questions.

Version 1 of the GPA board 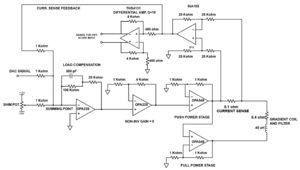 Click here to view the schematic for the GPA boards generated in Eagle (version 6). Note that a separate A/D converter was used in the initial realization of the boards (DAC on the GPAs was not populated).

Click here to download Eagle version 6 board (.brd) and schematic (.sch) files for the V3 GPA board (does not include on-board DAC).

Version 2 of the GPA board

Version 2 of the board differs from Version 1 in the following ways:

The analog stage still uses two OPA549 power op amps in a push-pull configuration. But instead of a summing point op amp (as in V1), two feedback loops are used across the current sense resistor. The circuit is designed to run on a 14V-to-24V supply rail, with higher rail voltages providing faster gradient slew rates for a given load inductance. The circuit specifications and performance are described in more detail in an ISMRM abstract: Arango et al., ISMRM 2016, p. 1157. Click here to download slides from the ISMRM talk. The circuit was originally designed for use as an 8ch open-source, low-cost current driver for multi-coil shimming and other applications. Click here for information about the 8ch board, including software for simulating the open loop transfer function and step response of the circuit into a specified load (useful for choosing the load impedance compensation circuit values).

Analog stage schematic for GPA Version 2. Stability is ensured by compensating the gradient coil load inductance using a lead compensator in the feedback loops. To compensate different loads, only two capacitors need to be changed as indicated in the yellow box. Circuit was designed and laid out by Jacob White and Nicolas Arango at MIT.

[Click here] to download Eagle version 6 board (.brd) and schematic (.sch) files for the GPA board with on-board DACs (Rev B). GERBER files for board production are also included.

Known bugs in Rev B: (1.) The LT1920 current sense buffer op amp is not working and requires debugging. The positive rail of the op amp was mistakenly connected to the +24V rail instead of the regulated +12V rail. We recommend using the board without the LT1920 for the time being until a bug fix is posted. (2.) The stencil for the Avago HCPL-0738 optical isolator showing the location of Pin 1 is incorrect. The stencil does not correspond to a possible location where Pin 1 can be located. Instead, the stencil should be lined up with Pin 4 on the IC.

6th order butterworth low pass filters were added to the lines leading to the gradients.

The final version of these files can be downloaded as Eagle 5.11.0 and Gerber (for having the boards manufactured).

Note: Inductors were selected based on lead time and inductance and NOT on the package. Any inductor with similar inductance would work. The board was specifically designed for the following: 2.1 uH, 7.7 uH and 5.6 uH.

Note: All capacitor pads are for a 1206 package. There are four pads at each spot to allow for using multiple capacitors to obtain the specified value. 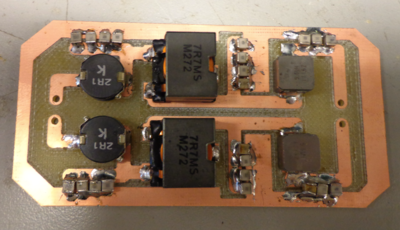 Sample of populated filter board (v1)

Using the existing Rev C shim amplifier board, this GPA gives 3 channels of 8+ Amps of current. Channels X and Z have a gain of 5.5 A/V, and channel Y has a gain of 3.75 A/V. The GPA is powered with two series 24V supplies. Three BNC connectors take voltage waveform inputs at audio frequencies output to three banana plug outputs. An ammeter tracks total current use for the board, with a typical quiescent current of 600 mA. There are current sense pins available per channel at 1 V/A.

To use the Rev C shim amplifier board, the GPA groups channels together (3 for X, Z, 2 for Y) to raise current limits. The shim pcb is fitted with an additional buffer board that attaches on top of it. The buffer board buffers the inputs and current sense outputs to avoid grounding issues. The inputs and outputs to the buffer board are wires that are jumped onto the board.

The Rev C shim board requires a tuned compensation feedback loop to avoid signal ringing. This is dependent on the load -- for the Halbach scanner, a tabletop MR scanner with ~400 uH coil inductance and ~2 Ohm resistance, the feedback capacitors are currently 1470 pF. This requires switching out components to change.